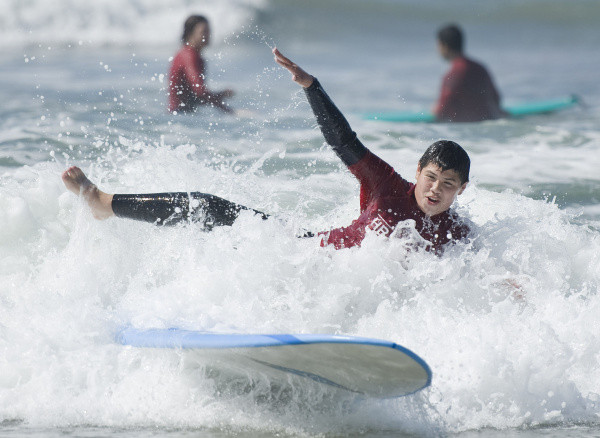 25 Feb From South Central to Surf City: police cadets take on the waves

Posted at 07:00h in Community, LAPD by Maria Bereket 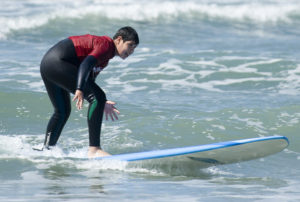 Our partnerships in the community extends beyond just the Equine Therapy Programs offered at the Huntington Central Park Equestrian Center.  We support programs that bring kids into Huntington Beach that teach them about community and possibilities.  The LAPD has worked with us to coordinate programs like the Surfrider Surfing lessons written about below.  We help to facilitate these types of activities and have done so almost every year since the OC Register wrote about this in 2014.  Their impact is felt long after the surfing lessons and we look forward to sponsoring and participating with many more such events.  The Free Rein Foundation

Gabriela Belasquez stood on the sand on the south side of Huntington Beach Pier, looking out to glistening waters with her wetsuit and hair sopping wet as she took a break from the crashing waves.

“Where we come from, we can’t see this kind of stuff,” said Belasquez, 19, from South Los Angeles. “It’s showing us there’s something out there for us.”

A group of Los Angeles Police Department cadets from the 77th Street Division traded in a day on the hard streets for a day of soaking in the sun and learning how to surf. It was all meant show them there’s much more outside of the inner city.

Eight cadets ages 11-19 showed up Saturday morning at HB Surf School, where they got the basics of how to put on their wetsuit – the zipper goes in the back – and how to strap the board’s leash around their ankle. On the sand, the group did a few practice runs, popping up on their boards, legs bent and arms reaching out to keep their balance.

When surf-school owner Bill Sharp heard that the group of cadets wanted to surf, he didn’t hesitate to offer his services. Sharp was raised in South Africa, where he helped many kids from rough neighborhoods get into the water.

Back in South Africa, it was a rule – if you wanted to compete internationally, you had to teach the black kids in the neighborhood how to surf, the former pro surfer said.

“They’d bring the little black kids to the beach; they had never seen the ocean. They had never been in two inches of water. There was no water where they lived,” Sharp said.

For Sharp, who has been surfing for about 50 years and teaching for 35, there’s nothing more rewarding than watching someone stand up on a board for the first time.

“It still shocks you. But for people who live here, they don’t realize what is happening just a few miles from here,” he said. “The violence and the intimidation, it’s crazy stuff. I’ve lived it.”

Pam Conti, Surfrider education chairwoman for the Huntington Beach and Seal Beach chapters, showed up to talk to the kids about the effects of inland trash on the ocean. 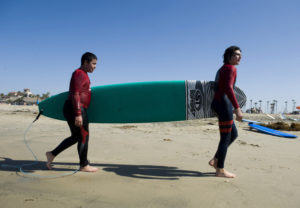 “These kids are trying to better their lives; they come from really hard circumstances,” she said. “Some of them live 10 minutes from the ocean and they have never even seen it, so we’re just trying to show them there’s a different way.”

LAPD Capt. Bob Arcos said the cadet program is meant to open up new worlds for teens who can far-too easily fall in with the wrong people.

In a way, the day of surfing can be compared to what they face at home, he said.

“To get up on a surfboard is challenging, it’s difficult, there are many obstacles,” Arcos said. “For these kids to walk to school, to participate in our programs, they have to walk through some tough neighborhoods. It can be very difficult for them to be mindful of the peer pressure and not succumb to the narcotics and the drugs and violence.”

Being in police photos or wearing their cadet uniforms in public can be risky, with gangs around that wouldn’t take kindly to a kid working with the police. 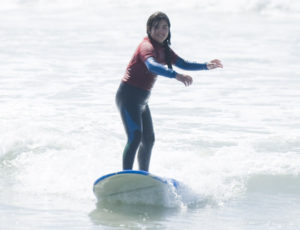 Sanlly Mazariegos smiles as she stands up during surf lessons from the HB Surf School in Huntington Beach Saturday.

“They don’t show their uniforms because then they’re called the street slang of a rat,” said Sgt. Alejandra Fiallos, an officer in charge of community relations. “These programs offer the community, the parents and kids a place to go. They look up to us.”

Cadet Erick Ruiz, 16, has swum in pools before, but has never been on a surfboard.

“(This) gives us a chance to experience something we may never get to experience,” he said. “Most kids don’t get the chance to get to the beach or to surf. This is really good for us kids to get exposed to new things.”

He said the cadet program taught him how to open up more to people and make new friends. He saw many of his old friends go down the wrong path.

“Gangs, drugs, peer pressure, I’ve had friends fall into that,” he said. “They get into the gang life, they get influenced by other people to get into drugs. Then, after that, it’s just downhill.”

Ruiz has dreams of becoming a police officer.

Belasquez is in college studying administrative justice and tries to be a role model for her four younger siblings. For others in her neighborhood, it’s not as easy.

“Where I live, it’s easy to get involved with the kids who aren’t doing well. Gangs, drugs, narcotics are all over the place,” she said. “Right now, you can say I don’t have friends. The station right now is my second family. We all support each other.”

Balasquez gets to the beach only about twice a year, and many times has watched surfers taking waves and thought, “I want to be like that, one day.” 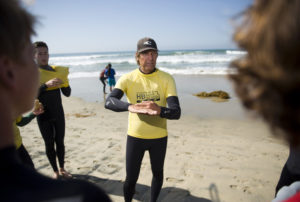 But surfers in her ‘hood aren’t the norm.

“Where I live, it’s not a possibility,” she said.

On Saturday, she proved she could be different, standing on the surfboard several times, supporters on the sand cheering her on.