Not ready to sponsor Sandra?
Make a one-time donation. 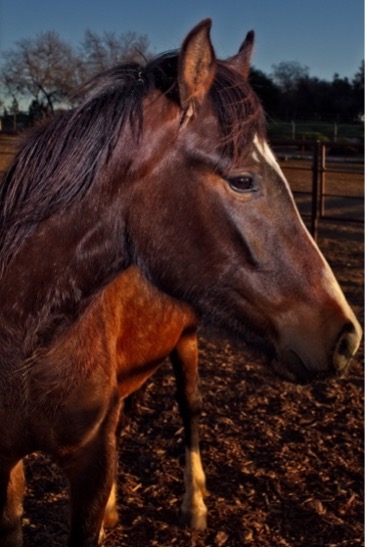 Sandra and Luna are two gorgeous, young mustang fillies. Each bears a freeze mark (a permanent, unalterable and painless way to identify each horse as an individual, applied on the left side of the neck), indicating they were captured by the Bureau of Land Management. Their freeze marks tell us Luna and Sandra came from Northern California, and each is nearly 4 years old. 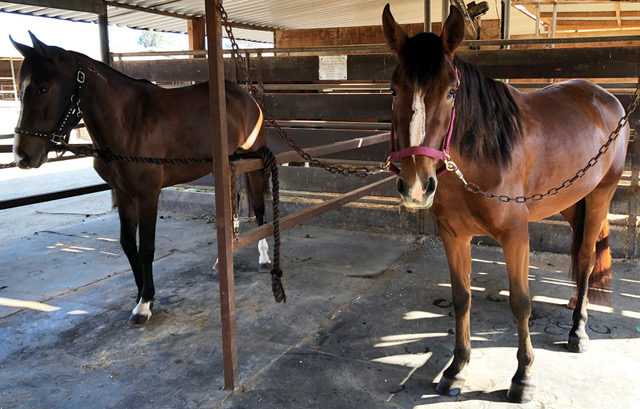 Sandra and Luna were acquired from a woman in Northern California who had adopted them, then found herself in over her head, both financially and in knowledge about how to train them (mustangs require different approaches in training than domestic horses).

These two youngsters look very much alike. Like most mustangs they are petite. They stand about 13.5 hands, although they could grow a little more as they mature. Having come from the same herd, it’s quite possible they are cousins, if not sisters. Both are bay colored—brown bodies with black manes, tails and lower legs, and white blazes on their faces. Sandra is a bit darker and duskier. Luna is aptly named, with a half-moon cut-out in the middle of her blaze.

These little ladies are both strong, healthy and more intelligent than the average horse. Luna was the first to start training. She is more docile, yet outgoing and playful. In the pasture, she is more likely to come and greet you. Sandra is more high energy–she doesn’t like to stand still for too long, and sometimes starts to dance with impatience. Their trainer says they are “exceeding expectations” in learning English and Western skills, including trail riding.

Both fillies are available for sponsorship or adoption into loving families.