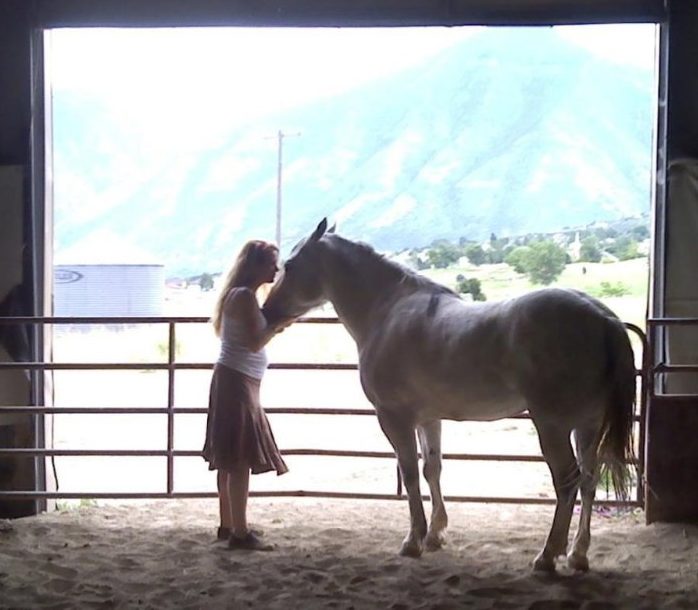 31 May The Doctor is In: Animal Thinking

Some people question me about using the word “insightful” when talking about non-human animals.

Are horses, or other animals, capable of insight, or is it just our imagination or desire to make them more than they really are?

It is difficult not to become anthropomorphic when describing what appears to be cognitive behavior on the part of other animals.  And as it happens, to avoid implying other animals have human attributes, behavioral biologists for many years abided by the so-called Morgan’s Canon, a rule for interpreting non-human behavior.

As summarized in Wikipedia, this meant,

In other words, let’s assume non-human animals lack human attributes like purposeful and rational thinking and let’s deny these traits to the rest of the animal world, unless we really, really, have no alternative.  Well, as it turns out, we really have no alternative.

Psychologist Irene Pepperberg’s best-selling Alex and Me is a book-length exposition of cognitive thinking in Alex, an African Grey Parrot.(The subtitle for her book says it all:  How a Scientist and a Parrot Discovered a Hidden World of Animal Intelligence — and Formed a Deep Bond in the Process.)

And see if you can watch this video of a wild crow solving a complex problem without concluding that it is exhibiting insightful behavior.

Of course, these are just two examples of what has become a revolution in how we understand other animals.  The Wikipedia entry for Animal Cognition runs several pages and has nearly 150 references.

So today there is a general awareness that non-human animals are not just automatons, and they are capable of complex cognitive activity.

Well, I’ve been around horses most of my life, and all I can say is, I came to this conclusion a long time ago.  You simply can’t spend time with these magnificent animals without coming away with an appreciation for their intelligence.

But back to the original question:  Can they be insightful?

Several years ago I became a trained equine-assisted psychotherapist (EAGALA is the certifying organization) and I founded a non-profit organization devoted to providing therapy to those in need.  (Originally it was called Horse Nation, today it is Free Rein.)  On one occasion, a few years ago, we were doing a group therapy session with women in recovery. There were approximately ten women and four horses.

At that time, the horses were standing just outside of the group.  One woman began talking about her recovery, relating that she was having difficulty staying sober.  And then at that moment, it dawned on her that she hadn’t talked to her own “higher power” for years. And at that moment, without missing a beat, Higher Power walked into the group, through the middle of the circle, and over to the woman and stood right in front of her. 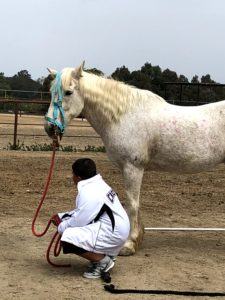 Equine Assisted Therapy is “experiential” so instructions on how to put on the halter is not a part of the session (safety is always monitored for horses & humans.)

In one of Free Rein Foundation’s eight-week Youth Enrichment Programs, there was this 11-year-old boy who looked 13 and acted like a tough guy. He initially walked into the pasture stating he didn’t like horses and refused to even touch one. What was interesting,

during the entire eight weeks, the horses surrounded him and one, in particular, followed him. Every week when the boy walked into the pasture, a horse named Doc met him at the gate, walked directly behind him, and stayed behind him throughout the session. This behavior definitely was not typical for this horse.

A facilitator mentioned that she noticed that there was someone always standing behind him. What did he think of that? The boy would just look at the facilitator and shrug.

Here, with these horses, he began to feel safe.

For the first time in his life, he felt someone was watching his back. The horse had his back.

Now, he felt that strength daily when he walked his sister through the neighborhood. The horse was always with him. 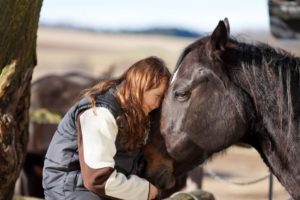 These are the kinds of moments that can happen with equine-assisted therapy, and we, the participants, are left in a state of awe, knowing that a mix of insight and magic has occurred.

The insight of the therapists comes from training and experience.

Carole Harris is a Healer, Philanthropist, Speaker, Writer,  and Environmentalist from Huntington Beach, California. She founded the Free Rein Foundation and is a certified equine-assisted psychotherapist.